It wasn’t getting a freshly plucked rooster for my birthday that made it so memorable. It was the realization of what a real chicken tasted like.

It was early spring. Michael Burns had just driven down from the Finger Lakes to the city. Hopping out of his trusty Hyundai, he walked toward me with a lopsided grin and a clear plastic bag. “Happy 40th,” he said thrusting a naked bird forward in the chilly night air. I took the bag and inspected the tight, vibrant flesh in the streetlight, noticing a few pin feathers attached to the lower leg revealing this was a home-grown bird.

“I have a recipe from Julia,” Mike said, pulling out a folded sheet of paper his neighbor across the swamp had given him. The handwritten note, labelled “Coq au Vin,” called for two bottles of wine and four hours roasting time.

“I’ve never cooked a bird that long or with that much wine,” I said skeptically.

“The breed is not a standard Cornish Cross. This rooster has been living outdoors for nine months, so the meat is more flavorful but it’s also more muscular than a chicken that spent its short life crammed in a cage,” Mike explained. “It needs a lot of wine and time to make the meat tender.”

[EDITOR/FARMER’S NOTE: The Dark Cornish whole chickens we sell are younger, pure-bred versions of the bird Arun enjoyed. They are even more tender and bake in less than two hours. To prepare them, I have used many variations on this Epicurious.com recipe]

The next day, after a night of warm company and greasy good Chinese food, I assembled the ingredients – rooster, wine, onion, carrots, celery, herbs, olives. After cutting up the bird, I heaved my ginormous cast-iron skillet on the stove and gently browned the thick-skinned legs and breasts in a little vegetable oil. This technique draws out fat, while developing deep, rich flavors. The prep time was quick, a little chopping, and the cooking required little effort, other than my presence to check its progress. After sticking the skillet into a hot oven with the veggies and wine, which would break down the muscle, I retired to the living room. Slowly the apartment filled with the aroma of chicken and wine. I pulled it out after two hours, figuring that was plenty of time, but the meat was still tough.

“Wow,” I said. “I guess Julia was right.” Back in the oven it went, but after another hour the bouquet and my hunger proved too much. I pulled it out. The sauce was velvety and plum-colored. The meat was delicious, but still needed more time. No matter. I tore into a leg. It was the best-tasting poultry I had ever had, better than organic poussin (young chickens) raised in Quebec and sold in New York gourmet stores.

When trying to describe the flavor of chicken it’s hard to avoid being self-referential – tastes meaty or chicken – sounding like a chemistry professor discussing flavor precursors like ribose-5-phosphate, Maillard reaction, and volatile carbonyl compounds, or taking literary flight, “eating the chicken was like sitting on a verdant hillside, exploring a sweeping valley of flavors.”

But there’s another way to describe it.  That outdoor-living, pasture-strutting rooster didn’t taste bland or mushy or dull or chemically. In Pandora’s Lunchbox, author Melanie Warner talks to a food scientist who suggested a taste test. Take three chickens: a factory-farmed inmate, a mass-produced organic chicken and a true pastured chicken like my rooster.

“The cheap chicken,” Warner writes, “will have minimal flavor, thanks to its short life span, lack of sunlight and a monotonous diet of corn and soy. The organic chicken “will have a few ‘roast notes and fatty notes.’” The pastured chicken is a “happy chicken” that “spent its life outside, running around and eating an evolutionary diet of grass, seeds, bugs, and worms.” Eating one is hitting the culinary jackpot as it will have a “deep, succulent nutty taste” that’s “incomparable” to the other chickens.

The chicken Mike gifted to me had that well-rounded symphony of flavors. He was a big boy, but he slowly disappeared into my belly. By the end of the week, all that remained was scraps and puddle of sauce, the stuff you throw away. But I greedily savored every morsel.

Fast forward to the present. Mike told me he was raising a whole flock of Dark Cornish, a heritage breed. “They’re natural foragers,” he said. “When I would open up the coop a lot of them went straight past the feeder for the brush to eat insects, sprouting grasses, seeds. They’ll even eat small animals. Chickens can be carnivorous, and these ones are smart enough to catch a frog or mouse.”

I tried to entice him to come down the city after he slaughtered some that he raised for six months, the optimum time to balance size, flavor and texture. He said the leg meat “is remarkably like a turkey, while being tender.” But since these are meat chickens, “they also have big white-meat breasts, so you get the best of both, and the flavor is incredibly rich.”

Alas, our schedules didn’t allow for us to meet up. But for those in the Finger Lakes, Cayuta Sun Farm has about 40 birds left, which would make a great holiday treat.

For more information or to place an order visit CayutaSunFarm.com.

Arun Gupta is a graduate of the French Culinary Institute, cooked at the renowned Savoy restaurant in New York, and is a contributing writer to The Progressive, In These Times and The Guardian. An alternate version of this article was published by Truth-Out.org on December 23, 2013. 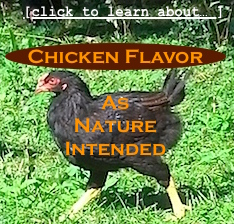